College Recruiting – how do I get a college coach to notice me?

Many times parents and players are seeking information on the recruiting process and how to go about being noticed by a college coach. There are so many questions to ask and so much information to process. When do I need to apply? How important are test scores and grades? How do I contact a coach? Do I need a video? What is the eligibility center?

Even though each school and each coach deals with recruiting differently I think that there are a couple of general statements that are true for everyone:

-      Try to be realistic when it comes to soccer

When it comes to the soccer team - DO YOUR RESEARCH!!

Educate yourself about the team and the conference. Go and watch a game or two so you know the level, the team’s style of play, and see for yourself how the coach is interacting with the players and what type of coach he or she is. I personally think that this is very important and something that many players and parents forget during the process. 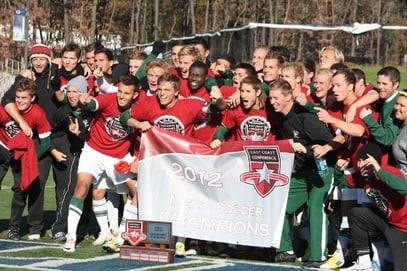 Communication - How To Stand Out In a Positive Way

(The percentage is slightly higher for women soccer players and the percentage is less than 4% for both men and women basketball, statistics for more sports can be found at the link below)

I receive over 50 emails per week from players, parents, and recruiting agencies with player resumes, videos, or general emails. Most of these emails I directly delete and the biggest reason for this is that the email isn’t customized for me specifically. It is obvious to me when the email is sent out as a mass email. My name is not included, it simply states: “Dear Coach” and the name of my school is not included, it says “Your School”.

Maybe a line about a recent game or an upcoming game?

Example:  “Coach Lindberg – Congratulations on a great result vs ABC University…” or I saw on your website that you have a big conference game coming up, I will try to make the game”

This goes a long way and it shows the coach that you have a real interest in the school and the team. If I receive an email like that, I will make sure that I reply to that potential student-athlete.

I also think that it is important that the student and not the parent(s) are the driving force when communicating with the coach. Obviously, the parents have a major role in the process, and especially the finances involved, but I look for players that are mature and independent and can keep a conversation via the phone or in-person without Mom answering the questions every time. Start with creating an email account in your own name.  Your parents can certainly help you drafting the email and help you out, but when I get an email from MarySmith@emails.com from a player named Justin Smith it is pretty obvious to me that I am in fact communicating with the Mom and not with Justin.

Once you have sent an email, wait a few days and then follow up with a phone call to the coach. It is amazing to me how few times this happens. A simple call to the coach -- introducing yourself, checking to see if the coach has received your email, and once again expressing your interest of the school and the team -- would go a long way and make a very good impression on me. It tells me you are serious about your interest and that you are a mature and responsible young man. Once you have the coach (or the assistant coach) on the phone ask the coach if you can set up a visit to the school and come and meet with the coach.

Once you have a meeting set up, you need to prepare for the meeting. In my next entry, I will discuss what you need to do to prepare yourself for such a meeting and how you can increase your chances of making a great impression.

Andreas Lindberg is the site director for Future Stars at Farmingdale State College.